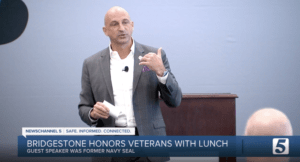 The lunch was held to show support for employees who have served or are family and friends of those who are.

“In today’s day and age, we are a 100% volunteer military, and it’s really important that we honor and respect — and we show that we value — the service our military provides so that we can inspire other people to raise their hand and serve. So, when companies like Bridgestone get involved, that shows the community that they value veterans and that they’re really investing into them hiring veterans. And having an organization like BRAVO within the organization is really a tremendous bolster to support initiatives like these,” Newman said.

Bridgestone Americas Veterans Organization, or “BRAVO,” seeks to support military causes around middle Tennessee and keep veteran employees engaged. BRAVO is Bridgestone’s employee resource group which has its own initiatives and gives back to the community through company events throughout the year.

Newman said he felt like he won the lottery when he entered the Navy — it was a choice that turned out great for him.

He also said that the skills he learned while serving can transition into the workforce.

“Being a great teammate, I mean that’s transferable, absolutely. Being prepared for whatever it is you’re being asked to do and know that the expertise is at the level you’re supposed to. Servant leadership and training the people behind you, making sure that your replacements are ready to take on the mantle in your stead — [it’s] really important stuff that translates across to everyone,” Newman said.

Newman’s dad was also a veteran who served in Vietnam. He said that added perspective to just how important it is for corporations to have a community for their veterans, to show they care about military men and women.

“To be able to see my father feel fulfilled through that, and that our society has recognized that you don’t have to necessarily agree with what the veterans do, persé, but recognize the value of what they’re doing: writing that blank check of their lives to make sure that you can live the kind of life that you want for you and your children and make things better,” Newman said.