Are you ready for the 2nd Annual THF Swim for SOF event?

The Honor Foundation is excited to announce September 17, 2022 as the date for the 2nd Annual Swim for SOF event in San Diego!

This charity swim across the Coronado Bay — from the beach near Hotel Del Coronado to Tidelands Park to the USS Midway — will be bigger and better than ever.

Participants of the swim will include THF Alumni: U.S. Special Operators who have completed The Honor Foundation Program and have transitioned into their next career after active duty service. These outstanding men and women are fundraising to help support future Fellows of the program as they begin their own journey in finding their next mission in life.

We are also welcoming First Responders to join, as well members of the San Diego community to unite in patriotism across the county.

Stay tuned for more information on registration and volunteer opportunities.

On September 18, 2021, The Honor Foundation hosted its first Swim for SOF (Special Operation Forces) event in San Diego, CA to commemorate the 20th Anniversary of 9/11– a 3.3 mile swim from Coronado Island to the USS Midway with 2 tribute workouts to honor those we have lost.

Swim for SOF was transformed from vision into reality by THF Alumni and Race Director, Jason Goyanko, and consisted of 45 Swimmers dominated San Diego’s first-ever open water swim across the bay, in support of THF SOF veterans, with speeds much faster than predicted.

Thank you also to the USS Midway Museum; InterContinental San Diego; Maritime Support and Elite Maritime Services; to our Tribe of Volunteers; silent auction donors and Justin Melnick. We are grateful for your support.

We look forward to seeing all of you again next year!

The Honor Foundation’s Swim for SOF event on September 18 is a high-performance athletic challenge that will raise awareness and funds for transitioning members of the Special Operations Forces community.

This event is the first of its kind in San Diego and will feature a 3.3-mile open swim, push-ups, pull-ups, a ceremony at the USS Midway Museum and after-party at the Intercontinental San Diego.

Visit the link to view the full clip! 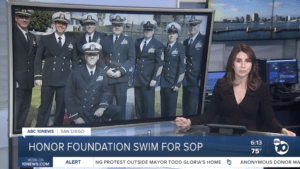