This Event Has Closed. 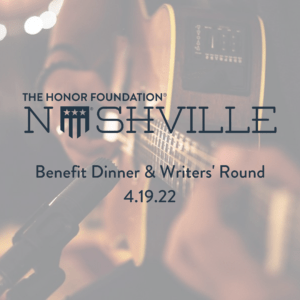 You are invited to an exclusive dinner featuring stories behind the men in uniform, followed by a Nashville Writers’ Round.

Writers’ Round will feature hit songs performed by the original songwriters:

“Named one of Rolling Stone’s 10 New Artists You Need To Know in 2017 and CMT’s Next Women of Country 2018— is a soulful and gritty songwriter from south Georgia, and she makes music that is an extension of herself. A passionate storyteller, Jo remains inspired by the countless hours she spent spinning her dad’s vast collection of vinyl records as a child growing up on her family’s cattle farm.”

Mark Nesler has had his share of #1 hits, including Tim McGraw’s “Just to See You Smile”, George Strait’s “Go On” and “Living and Living Well”, Darryll Worley’s “I Miss My Friend” to name a few. Mark continues to write every day and is one of Nashville’s most successful and respected songwriters and artists.

Wynn Varble, 2009’s Nashville Songwriters Association’s Songwriter of the Year Award, is also no stranger to #1 songs. All three of his #1 songs were nominated for “Song of the Year” by the CMA/ACM. He has written for and with Garth Brooks, Cody Johnson, Trace Adkins, Willie Nelson, Mark Chesnutt, Kellie Pickler, Lee Ann Womack, and many others.